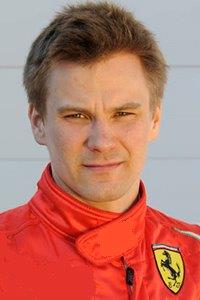 Toni Markus Vilander is a Finnish professional racing driver who currently drives in various categories of sports car racing. After a single-seater career which reached the level of the GP2 Series in 2005, Vilander switched to GT racing. He has had numerous success in GT racing, winning the 2012 and 2014 24 Hours of Le Mans LMGTE-PRO class races with AF Corse and former grand prix drivers Giancarlo Fisichella and Gianmaria Bruni, and also the GT2 class championship within the FIA GT Championship in 2007 and 2008.

Vilander started racing karts at the age of five, winning the Junior A class of the Finnish Karting Championship in 1995, and both the German and Oceanic championships in 1999. He then upgraded to open-wheel cars in 2001. By 2004, he was competing in Italian Formula 3 with the Coloni team, and upgraded to Italian Formula 3000 in 2005, as well as competing in the Italian GT series.

Vilander has competed in six Le Mans 24 Hours races from 2008 onwards, driving Ferraris for the AF Corse team. In 2008, he shared a Ferrari 430 with Thomas Biagi and Christian Montanari in the GT2 class but failed to finish. Two years later, he returned to La Sarthe to drive a Ferrari 458 Italia with Jean Alesi and Giancarlo Fisichella, finishing 16th overall and fourth in the GT2 class. In 2011 he again drove a 458 with Fisichella and Gianmaria Bruni in the new GTE-Pro category, improving to 13th overall and second in class having held the class lead for much of the 24 hours. Vilander made his début in the FIA GT1 World Championship in 2012, again driving a Ferrari 458 Italia for AF Corse alongside Filip Salaquarda.

Vilander has competed in the FIA World Endurance Championship since the series was launched in 2012, having made sporadic appearances in the interim Intercontinental Le Mans Cup series which preceded it. 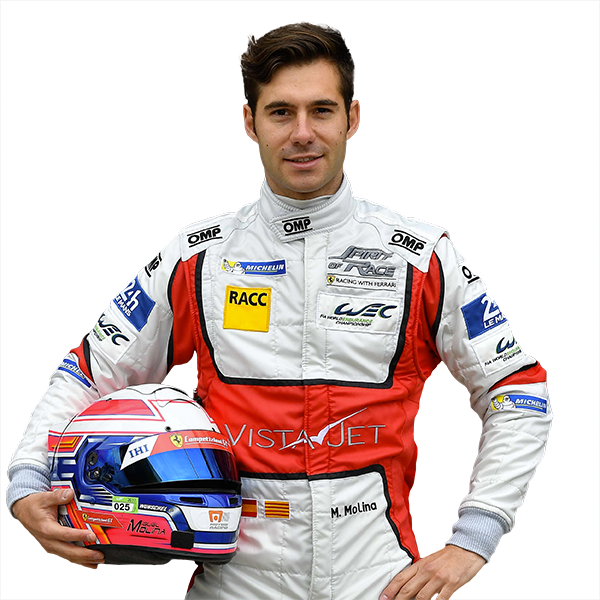 Miguel Molina was born in Barcelona on 17 February 1989 and began competing in karts when he was seven years old. In 2005 he made his single-seater debut in Formula Renault trying his hand in the Spanish Formula 3 Championship the following year.He finished sixth in the championship standings that year, winning on his home track in Barcelona at the wheel of the car of Racing Engineering. In 2007 he competed in the World Series with Pons Racing notching up wins in Barcelona and Estoril and finishing seventh in the championship. The following year he moved to Formula 3.5 with Prema Powerteam where he bagged another two wins (the Nurburgring and Estoril) and finished fourth in the standings. As of 2010 he left single-seaters for covered wheel racing and the DTM. He drove Audis for various teams taking part in 87 races and winning three (at the Nürburgring in 2015, and Lausitzring and Hockenheim in 2016). He tasted GT competition for the first time competing in a number of Australian championship races with Jamec Pem Racing.In March 2017 he became an official Ferrari driver for GT competitions. He has an intense programme to look forward to, including eight of the nine races of the World Endurance Championship (WEC) in the GTE-Am class in the Ferrari 488 GTE of Spirit of Race. At the 24 hours of Le Mans he will drive the 488 GTE no. 71 in the GTE-Pro class with Davide Rigon and Sam Bird. He will also compete in the Blancpain Endurance Cup with the 488 GT3 of SMP Racing along with Rigon and Victor Shaytar.